Influenza has caused the greatest visitation and the severest natural calamity in this century. Unimaginably, about twenty million people died in the influenza pandemic of 1918-1919. Why does influenza become a worldwide pandemic at times? Exploring its basic cause, in 1978 R.Ing suggested that except for the pandemic of 1889, the beginning dates of historical influenza pandemic in the 18th and 19th centuries (as well as pandemics and viral antigenic shifts in this century) appear to have occurred in years of high sunspot numbers.[1] We have different views on this. At the time of suggesting his viewpoint, R.Ing cited seven influenza pandemics in the 18th and 19th centuries, based on the researches by J.R.Mote. But from complete data published by J.R.Mote, there were fifteen main influenza epidemics in the 18th and 19th centuries.[2] He employs different terms for “epidemic” and “pandemic”, however, this distinction is purely for convenience as Mote indicated. Because different historical records had different criteria and different detailed extent, it is very difficult to compare relative epidemic scale to one another precisely. The distribution of the beginning dates of fifteen main influenza epidemics in the sunspot cycle is shown in figure 1. 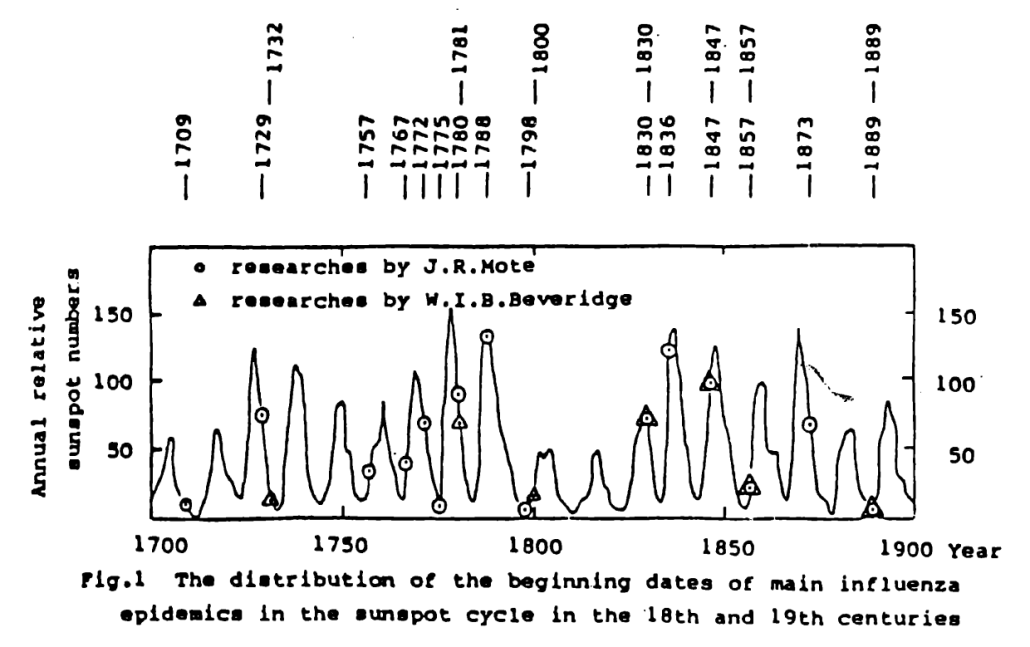 For explaining the mechanism on how high sunspot activity can affect influenza pandemics, Ing indicates that people conjecture that the amount of ultraviolet Light (UV) incident on the surface of the earth is increased by enhanced solar activity, which might conceivably accelerate the mutation rate of the influenza virus. This speculation cannot, however, explain influenza pandemics occurring in years with low sunspot numbers. In this paper we try to offer an explanation for this based on cosmic ray research.

B. Influenza and the cosmic ray environment

Since the start of systematic and continuous observations of cosmic rays in 1936, the number of ground level enhancement events had been rare in more than forty years. Among them, large enhancement events occurred only five times.[4] These large Ground Level Solar Cosmic Ray Events (GLEs) occurred on February 28, 1942; March 7, 1942; July 25, 1946; November 19, 1949 and February 23, 1956. According to research by V.M.Zhdanov et al.[5] there were five influenza pandemics in the first half of this century. Among them the beginning dates of two pandemics were in 1943 and in 1947. They occurred just after the first three large GLEs respectively. After the large GLE on November 19, 1949, in 1950-1951m there also occurred a severe influenza epidemic spreading to Europe, Africa, North America, Japan and other places. In Liverpool, the death rate even surpassed that of the pandemic of 1918.[5] So V.M.Zhdanov et al. held that the time of the fifth influenza pandemic in this century was 1947-Feb.1952. More so, in 1957, the next year of a large GLE on February 23, 1956, there occurred a worldwide influenza pandemic as well. Among the seven influenza pandemics occurring in this century, it was the second most severe pandemic. We note that after five large GLEs occurred in the past forty years or so, influenza pandemics invariably broke out in each case. Therefore, very remarkable is the corresponding relationship between influenza pandemics and large variations in the cosmic ray environment.

These extraordinary events in the cosmic ray environment all occurred before the influenza pandemics by one year or so. To start a new influenza pandemic this interval is reasonable, since it takes time for influenza viruses to mutate or to recombine genes, and then for selective human immunity to form new pandemic strains.

Among these pandemics the severest one was that of 1957, and the GLE on February 23, 1956 was the largest GLE among all recorded. It seems as if the scale and impact of the influenza epidemics were related to the enhanced amplitude of ground level cosmic rays. But this relationship might not be simply understood as a direct proportional relationship.

The mechanisms on how the cosmic ray environment can affect influenza pandemics cannot be discussed here in detail. We presume it has these main aspects.

Here we want to raise a new issue i.e. the relationship between the novae and influenza pandemics. From table l we notice that there is a very good corresponding relationship between bright novae and the first four influenza pandemics which occurred in this century. In this century there have hitherto occurred only eight novae with a maximum apparent magnitude (MAM) brighter than 2.2 and table 1 lists as many as five bright novae. The three others are GK Per with a MAM of 0.2 in February 1901, V476 Cyg with a MAM of 2.0 in August 1920, and V1500 Cyg with a MAM of 2.2 in August 1975. After the occurrence of Nova V1500 Cyg, we have noted that swine influenza virus(Hsw1N1) reappeared in 1976 and the H1N1 subtype resurfaced in 1977 and spread to wide regions of the world. After the occurrence of Nova V476 Cyg, we have also noted that influenza epidemics occurred in many countries, such as the UK, Ireland, Belgium, Norway etc., the influenza mortality reached a peak in 1922[5], As regards the Nova GK Per, we have not had detailed epidemiological data for the influenza in 1902, so we do not know whether an influenza epidemic occurred in that year. We note that epidemics or pandemics of influenza occurred after seven of those eight bright novae. Therefore, the corresponding relation between bright novae and influenza pandemics is also very remarkable.

About the great pandemic of 1918-1919, we think that its beginning was caused by other factors, but the Nova V603 Aq1 played a decisive role, for that is why the second wave of this pandemic became very different than the first wave in terms of mortality, and turned into the most spectacular outbreak of any disease for hundreds of years.

Table 1. The contrast between bright novae and the first four influenza pandemics in the 20th century.

Table 2. The contrast between the years of maximum brightness of Nova λ Car and the years of influenza pandemics during the 18th and 19th centuries.

As regards the influenza pandemics of 18th and 19th centuries, we found that there exists an interesting relationship between them and Nova λ Car. The brightness of λ Car was variable. It was sometimes bright and sometimes dark. According to the research by C.Payne-Gaposchkin[7], in the 18th and 19th centuries its maximum occurred only eight times. Table 2 shows that after every maximum brightness of Nova λ Car there was almost always an influenza pandemic. Especially in the 19th century, their relationship bordering on a one to one correspondence. It is hardly conceivable to observe such good correlation. Is it possible that the Nova λ Car could bring a very large amount of UV, X- and r-rays incident on the earth during its outbursts?

Nova are a violent explosive star phenomenon. People believe it is one of the sources of cosmic rays. If nova can influence influenza pandemics, then the signature of nova effects should be theirs high energy X-,r-rays (nova’s X-,r-rays—> the depletion of the atmospheric ozone layer —> the strong increase in the solar UV radiance incident on the surface of the earth —> influenza pandemic). Nevertheless, bright nova are a rare astronomical phenomenon. In the past forty years or so there occurred only one bright nova with MAM 2.2. The modern data of cosmic ray intensity variation effects of nova is scant, so it is difficult now to draw sound conclusions with regard to the extent that bright nova affect earth’s cosmic ray environment. However, the excellent correlation between influenza pandemics and novae implies strongly that the cosmic ray environment variation of earth should be seriously investigated after the occurrence of nova. Therefore, we suggest that the intensity variation of X-,r-rays and UV will have to be investigated by various observational means from ground level to satellite altitude when turning up outbursts for λ Car or during bright nova in the future.

According to the excellent correlation in the past, we propose four indices to predict future influenza pandemics:

When one of these indices occurs, it would not at all be surprising if a new influenza pandemic should emerge soon after.

We are glad to report that according to the first index we successfully predicted the influenza epidemic in 1984. On December 8, 1982 there occurred a middle GLE.[11] The author delivered a report to the China Influenza Centre predicting that an influenza epidemic would soon emerge in the world in 1984. As expected, the influenza epidemic emerged. In the USSR, in two months from the second half of January to the first half of March, the number of cases of influenza illness reached several million, with about 3-5% of the population being affected during the week of highest activity[12]. In big cities and in the capitals of fifteen Soviet Socialist Republics the incidence reached about 10% of the population. In the same time, widespread influenza illness was reported in the USA, many European countries, Japan, Pakistan, Algeria, Morocco, Tonga etc.[13] Therefore, one of the viewpoints of this paper has a successful verification.