The Plasma Event (aka EMPCOE) is a cataclysm theory. Perhaps its most vocal proponent was Brian Austin Lambert (aka. “BAL33”). Brian and his partner, Kimberley (aka. “Mia”), were found dead 10 March 2021. His death was ruled as a self-inflicted gunshot to the head. Mia’s cause of death has not been disclosed, but she may have been suffocated with a towel. 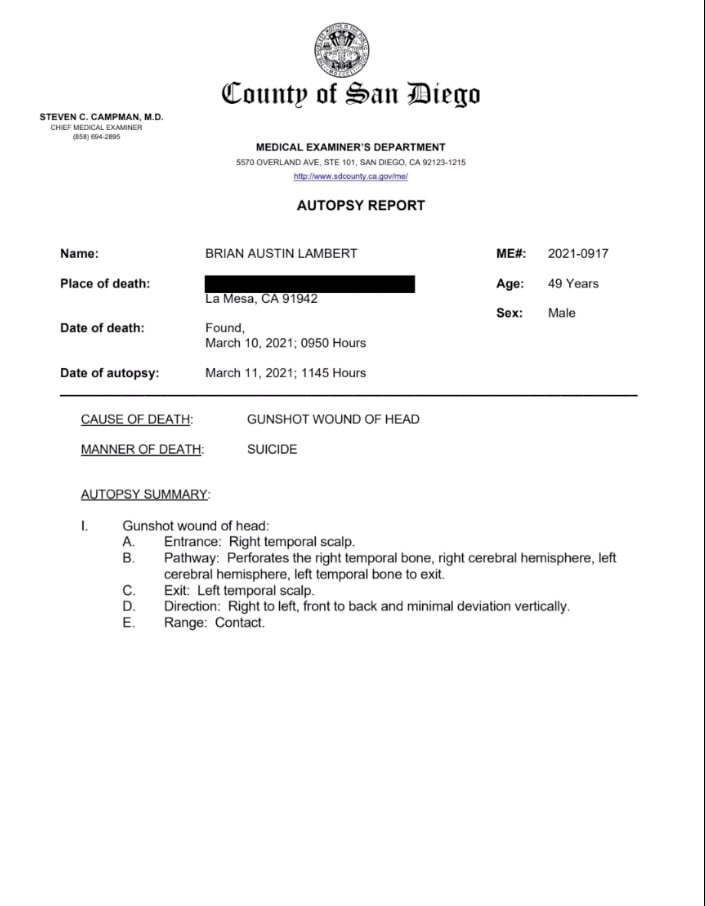 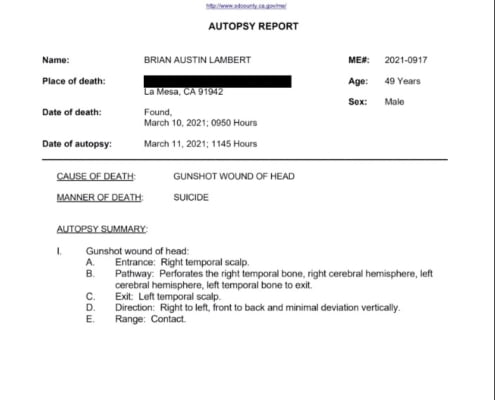 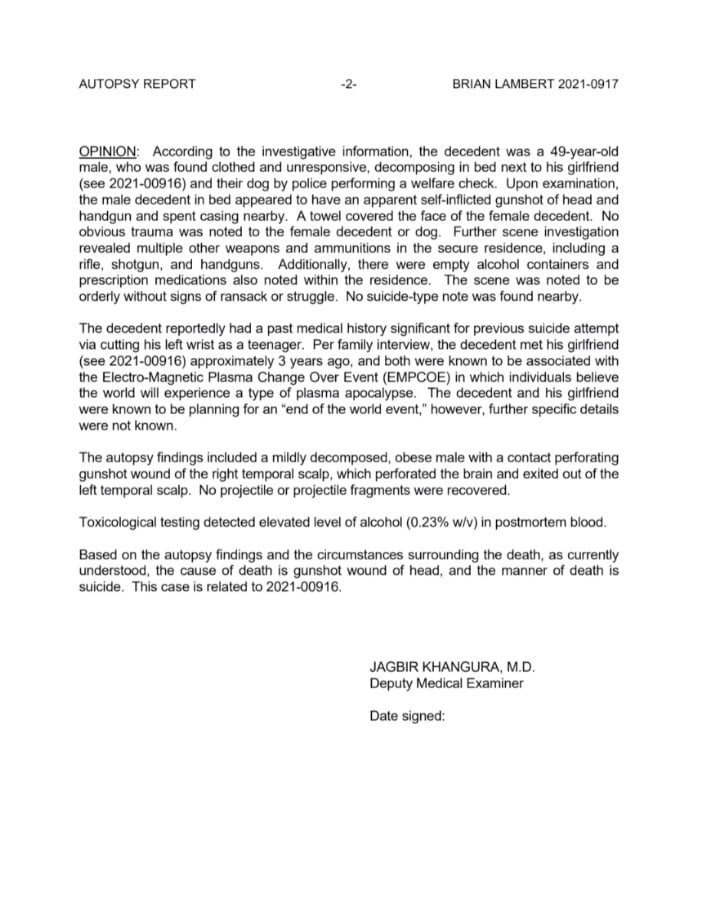 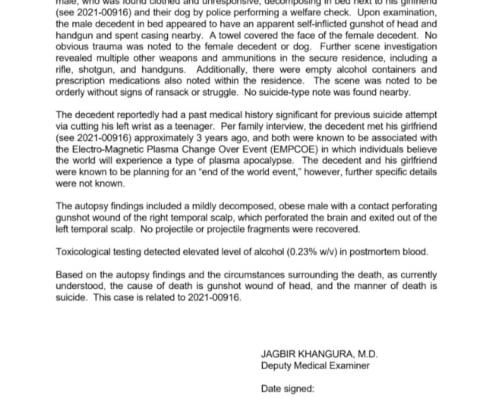 The summary is followed by one of Brian Lambert’s last videos, published shortly before his death.

There have been many plasma events or resets during our history, many of which we know little or nothing about, putting into question many of our currently taught historical narratives.

Some resets are minor or shorter while others are longer or major. The Great Food of Noah (Moon), The Tower of Babel (Mercury), The Hebrew Exodus (Venus), the Assyrian Captivity (Mars), The Christian Epoch (Jupiter), the Industrial Revolution (Saturn), The American Revolution (Uranus), the Mud Flood (Neptune), and World Wars I and II (Pluto) are all major resets in our history. The book of Revelation is a synopsis or script for these resets.

The last one now coming to light seems to have occurred 1n the early to mid 1800’s and is known as the “Mud Flood” which supposedly buried Tartaria (the last great world empire). Russian-based Tartaria was the foundation upon which our current world civilization was rebuilt. All of the old buildings, many with domes and spires belong to Tartaria and were simply dug out and reused by most of our leading modern institutions.

The next coming reset may be the largest and most important of all and is often referred to as the Plasma Apocalypse or Pole Shift. Plasma is the fourth state of matter which is the basis for the other three states -gas (air), liquid, and solid. It is found in its pure state between worlds or creations, and has the nature of gas or water, but is electromagnetic in nature. It is the force that creates and destroys worlds (Shiva), and will play a key role in these End Times (end of Kali Yuga), when this world or age is dissolved and a new one created.

Our dome protects us from the dangers of pure plasma. Only the light gets through. This swirling light is focused (by the dome lens) as our Sun, midway between the dome and our flat Earth surface. The swirling produces day and night and the seasons. Our dome also protects us from alien invasion, and its electromagnetic composition (layered with ice), also creates and holds our atmosphere or firmament which keeps the waters above (in “outer space”) separated from the waters below (oceans,lakes, and rivers). Our Moon is either a projection or the dome of another Earth neighboring us.

The dome is not only above us, but below us as well (like a bubble). Beneath our flat plane is Tartarus (not Tartaria) or Hell, with its various levels or planes. This is also known as the Inner Earth, and there is a reddish or pinkish Sun at the center, often described as Apollon, The Black Sun, The Anomaly, and even Mercury (Martin Kenney). Olaf Janssen in his book The Smoky God says this is the throne of Jehovah or Yahweh, who is also known as Yaldabaoth, the Demiurge, or the King of this World. Jehovah exited the Inner Earth (by ship?) thousands of years ago and led the Hebrews out of Egypt and back into the Inner Earth Promised Land.

Jehovah will once again leave his throne to gather more followers during the coming Plasma Event or Great Reset. This may also be or coincide with Great the Day of the Lord spoken of in the the Bible. Is Jehovah the true God -or His counterfeit? This is the great question many will have to grapple with (there is strong evidence for the latter). According to Jesus in the New Testament, the End may well occur in the winter and/or on a Sabbath. More precisely, it may be just after the winter solstice (Dec.21st). This rules out 2019 and 2020 as some people are predicting. According to JayDreamerZ, 2024 is a more likely year.

From Dec.25 to Dec.31 (seven days) is the actual Plasma event when part of the dome opens (the Galactic Rift?), possibly revealing Nibiru (see my aticle “Is Nibiru the Galactic Center” in the Astro Articles section). The opening or portal allows plasma to come in and air to go out causing depressurization of our atmosphere. That’s when all hell breaks loose and the different worlds or dimensions mix. That’s also when the stars appear to fall, the Sun goes black and the Moon blood red, the 3 days of darkness, the coming in of aliens and strange creatures, the going out of humans (being sucked out), the fog or mist, the earthquakes and tidal waves, the ice and snow, the great fires, the red skies, the blending of dimensions, people going insane, etc. The plagues during the Hebrew Exodus were a type of what’s coming in the plasma event or great changeover.

The elites know all about the coming plasma Apocalypse and intend to use the temporary Rift or portal opening to escape this plane and go on to others. They have built underground bunkers in case their plan fails but the bunkers will not save them. Plasma incinerates all metal and wiring and high tech which their bunkers depend on. Do NOT go in your car (metal) or be around wiring or electrical equipment during this time. Stay indoors with provisions until the plasma event passes. Cities and houses on shaky foundations will be hit hard. People in rural or warm environments will fare better. Fasting, prayer, and a pure diet will help. Be right with God.

After the seven days, after the Rift or portal closes again (beginning around Jan.1st) there will be a 3-month recovery period. The Earth will be very different now. The magnetic poles will have reversed so that the Sun will now rise in the West instead of the East. The evaporated ocean water will form a canopy over the Earth equalizing the climate throughout (mid-seventies Fahrenheit). Because of the cloud or ice canopy it will neither be too dark nor too bright. There will be no seasons or night or day as we know them. Also, no strong winds, and a stable climate, with refreshed oxygen levels leading to a garden paradise and greater health and longevity. The survivors of the plasma event will begin a new age or epoch guided by the lords of heaven.

There are several warnings here that were such an event to occur, it would be safest to be as far away from conductive materials such as metals as possible.

Are the symptoms of “COVID” actually the effects of cyclic electromagnetic changes in our terrain? Have the controllers decided to profit from this event rather than inform us of it? What role do intravenous electromagnetic adjuvants and microwave frequencies have to play? Is there a link to graphene? Production of graphene oxide relies largely upon plasma production processes. Would there be any effect or interaction between a widespread plasma discharge and graphene in vivo? 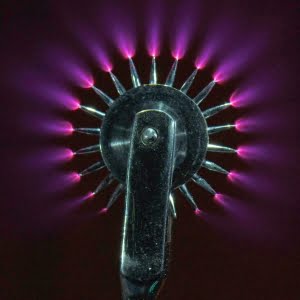 The synopsis of this very long and scientific article is this. I believe I have figured out what is really going on in our world and what the Karona Vye Russ (code for you-know-what) really is. I believe I know what’s coming to kill a third of mankind as prophesied.

First I thought it was a weapon like DEW or 5g and believe me the elite use many weapons and poisons to cull the heard. But this time there is a natural event at play. This is why all the elite organic food stores have closed (Earth Fare, Lucky’s) where I used to shop. They closed BEFORE the C. Vye Russ out break. Therefore I surmise the elite are eating their meals somewhere else. I am guessing they are in their bunkers snug and waiting for the danger to pass.

Below are many examples of “Corona Discharge” a very well documented electrical occurrence I just discovered. The discharges cause the same symptoms as the Karona Vye Russ is said to cause. The worst to the mildest. Same scope, same symptoms.

I am led to believe that the Corona discharges are beginning to happen to our electrical grid due to a change in atmospheric natural electricity called the global atmospheric electric circuit. I will be covering research on the atmospheric changes in my next article to prove my theories.

And if the changes to global atmospheric electric circuit are severe enough the entire grid that was once created explicitly with preventing Corona Discharges from happening is quickly becoming vulnerable to their occurrence because the very air is changing. And in the air is where the corona discharge phenomena happens. I think there is no contagion.

Not only is the electric grid becoming vulnerable to C.D.’s but many devices like air purifiers, and industrial grade air scrubbers in hospitals and other huge buildings, including the many uses for electrostatic percipitators like at power plants and coal factories are now vulnerable to C.D.’s.